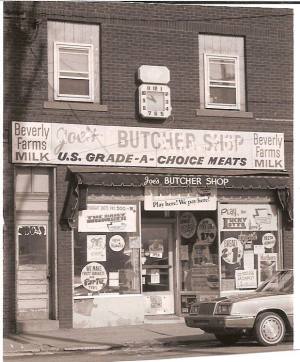 Sadly on May 10, 2019, Joseph “Joe” Pedulla, age 71 of Pitcairn. Born to Italian immigrant parents from Reggio Calabria, a small village in southern Italy known for its abundance of family businesses. His father Carlo settled in Pitcairn yet returned to Italy regularly. Joe was born and raised in a truly Italian home. From a young age, he was instilled with a strong work ethic. His career in meat markets began when he was a 7th grader at Pitcairn Junior High. With his father’s encouragement, he began working as a shop boy at Pitcairn Meats & Poultry on Center Avenue. By early high school, Joe was learning the art of butchering from his boss at Pitcairn Meats & Poultry, Nick “Spider” Mignogna. Later Joe was hired as a butcher and began to learn the grocery business from his mentor, Al Feczko, owner of Bell Rose Market located at 502 Broadway. In 1976, after a long tenure with Tom’s Butcher Block in Monroeville (where he not only became a member of the Butchers’ Union, but he served as Union Steward and Meat Manager) Joe bought the Bell Rose Market, and so Joe’s Butcher Shop was born.  Joe is also a certified pyro technician and lit many local and regional fireworks shows for well over twenty years. He served on both the Pitcairn Renaissance and Pitcairn Planning committees, was an active member of the local community.  He was a major contributor and planner of Pitcairn’s Old-Fashion Christmas for many years. He operated heavy equipment and would like to play in the dirt for relaxation. Joe is survived by his wife, Karen (Cunningham) Pedulla, son, Joseph Pedulla, sister, Catherine (Larry) Beadles, Father-in-law, George (late Louise) Cunningham, brother-in-laws, Boyce (Beth) and Jordy (Patte) Cunningham, numerous nieces, nephews and many friends. Family and friends welcome in the Alfieri Funeral Home, Inc., 201 Marguerite Ave, Wilmerding, Pa 15148, and 412-824-4332 on Thursday, May 16 and Friday May 17 from 2-8 pm. Mass of Christian Burial will be held at St. Michael Catholic Church, Pitcairn on Saturday May 18 at 10am. Everyone please meet at church. Joe will be laid to rest in Penn Lincoln Memorial Park. Please visit us at www.alfierifuneralhome.com for online condolences.

To send flowers to the family or plant a tree in memory of Joseph "Joe" Pedulla, please visit our floral store.

You can still show your support by sending flowers directly to the family, or by planting a memorial tree in the memory of Joseph "Joe" Pedulla
Share a memory
© 2020 Alfieri Funeral Home Inc.. All Rights Reserved. Funeral Home website by CFS & TA